A Random Encounter at Lucerne

June 08, 2014
It was our day to Mt.Titlis.  We had to take the Swiss Rail from Lucerne to Engelberg from where we could go up Titlis. As expected, like the immutable fact of every second and every hour, or more like Swiss clockwork, there were trains leaving for Engelberg, as we had been tonelessly informed by the man/boy behind our hotel desk ’ at every hour, 10 minutes past the hour ’. We were on time to take the next one leaving in 20 minutes.  We walked all the way down to board one of the carriages at the farther end of the platform. We were keen to give a miss to the noise and crowd of Indians who were  travelling in groups and in joint families. Bad combos both.  We expected them to fill into the carriages nearer the beginning of the platform. Well, we were only partially successful, but even then, it was a relief. Ok, I will stop this typical national self loathing of the travelling Indian and get on to the encounter or rather the connection, that happened. The train glided smoothly across t
Post a Comment
Read more 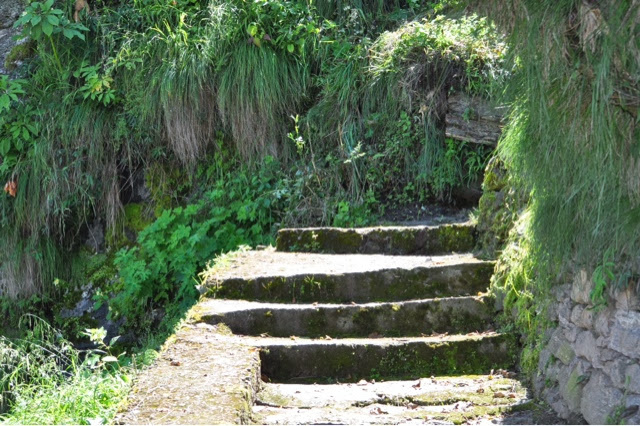 All of Life is Yoga A journey begins much before the first step is taken. It begins when the first thought about it enters your conscious mind. But at another level it may have begun much before that, when the seed of the journey is implanted into one’s sub-consciousness. This seed is nourished by various circumstances, thoughts, ideas, over a very long period. May be even years. And one fine day, due to some subtle neural connection it sprouts and assumes a conscious meaning. It then takes on an conscious life. After that, it is only a matter of time before the physical journey manifests itself. My journey began much before I actually took to the road. Quite literally. Mine was a journey of inner cultivation. And I had been on that journey for a long time. Subconsciously I don’t know when the seed to this journey was implanted, but I am sure it was a very long time ago. With a lot of reading. Over a lot of writing. After  a lot of self-enquiry. What is the purpose of this life? It is
Post a Comment
Read more

Have you seen a Fish cross a Road?

November 20, 2013
Dogs cross the road, cattle cross the road, but HAVE YOU SEEN A FISH CROSS A ROAD? Saw an amazing thing today morning when I had gone for a jog. I saw a small fish wriggling in the middle of the road. Even before I could figure out how it could have landed in the middle of the road, it oddly seemed to be wriggling towards the other side with purpose. I was amazed at this sight but doubt-fulll about whether this could be true. I started taking the video with my mobile but I could not do a good job, especially at the end. You watch it and figure out whether the fish was fully aware of what it was doing and was purposefully crossing over. But even then, I wonder how he wriggled out of the puddle on the other side of the road in the first place! I had to help it into the puddle at the end. It was very slippery and heavier than I had expected. It went in with a splash and in a flash it was gone. :-)
Post a Comment
Read more

October 08, 2013
If ever there is a story of wild living spirit set in a cold wilderness, then this is it. “ A vast silence reigned over the land. The land itself was a desolation, lifeless, without movement, so lone and cold that the spirit of it was not even that of sadness. There was a hint in it of laughter, but of a laughter more terrible than any sadness - a laughter that was mirthless as the smile of the sphinx, a laughter cold as the frost and partaking of the grimness of infallibility. It was the masterful and incommunicable wisdom of eternity laughing at the futility of life and the effort of life. It was the Wild - the savage, frozen-hearted Northland Wild.” With this, Jack London immediately plunges the reader into essence of the cold wilderness of the north.  But the effect is not one of being dazed or numbed by it’s cold or remoteness,  but rather the opposite, one’s senses are excited to a sense of a thrill. He then proceeds straight into the deadly  pursuit of humans, by the famish
Post a Comment
Read more

Review of 'BURIED IN THE SKY'

In a dark moonless midnight, two exhausted men, harnessed to each other, grappled below an icy peak, with just an ice axe holding them from a fall to death in an icy abyss below. Their mind dazed and hallucinating due to lack of oxygen and the air freezing their tongue when they opened their mouth to gasp for breath. Boulders of ice broke off above and hurtled past them as they shuffled and dodged weakly. They knew it was a matter of time before a ice boulder would knock them down. They had given up hope long back. They prayed silently with bowed heads to the mountain goddess. She answered soon. An ice boulder or rock knocked on the head of the lower man and batted him off the snow. The weight of his body on the harness peeled the man above from the slope. Both men hurtled down towards the black darkness of the icy abyss below. They wondered on what they had done to get the mountain goddess so angry. They wondered on how they could have got themselves into this
Post a Comment
Read more

September 04, 2013
Capt. Ramsey : You do qualify your remarks. If someone asked me if we should bomb Japan, a simple "Yes. By all means sir, drop that fucker, twice!" I don't mean to suggest that you're indecisive, Mr. Hunter. Not at all. Just, uh... complicated. 'course, that's the way the Navy wants you. Me, they wanted simple. Hunter : Well, you certainly fooled them, sir. Ramsey :  [chuckles]  Be careful there, Mr. Hunter. It's all I've got to rely on, being a simple-minded son of a bitch. Rickover gave me my command, a checklist, a target and a button to push. All I gotta know is how to push it, they tell me when. They seem to want you to know why. Hunter : I would hope they'd want us all to know why, sir. Ramsey : At the Naval War College it was metallurgy and nuclear reactors, not 19th-century philosophy. "War is a continuation of politics by other means."  Von Clausewitz . Hunter : I think, sir, that what he was actually trying to say was a little
Post a Comment
Read more

September 02, 2013
Physical Pain A way to true penance I can remember being aghast, seeing the rows and rows of devotees hanging by their backs. They were all suspended from a leaning pole, by hooks pierced on to the skin of their backs. Face down, arms spread, and in an angle as if ready for flight into the skies. I can remember the images of devotees with small spears pierced through their cheeks. They all seemed as if from some other planet. I can remember the images of devotees pulling the temple-chariot  by the ropes tied on to the hooks which were pierced on to their backs. As a kid I remember feeling shocked and numb. These images of self-crafted pain became imprinted on to my memory undelibally. Over time, these images somehow became a part of my inner imagery of this worldly life itself: images of living that I had encountered in my life for which I had no answers. To me these images of pain, became a part of a collage of images that symbolically represented life and its sufferings that I c
Post a Comment
Read more
More posts